hi i am a cch sufferer and have been for 6 years now. i lost my job in the royal navy 4 years ago and had to go to a medical bored and wrute a personal statment going into every dtail of how this effected me right down to my sex life ect. needless to say this wasnt an enjoyable experince and is very emotional. i now have a home visit in febuary for PIP and am so nervouse i feel anxiouse already. i find it really hard to talk about my cch and how it effects me and those around me. does anybody know what types of things they will ask me just so i can prepare my self. any advice would be great thank you sorry for going on. 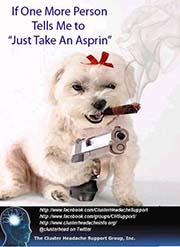 If you type in pip scoring into google it gives u all the criteria that u need to meet to score 'points' and how  many points u need to get it.. Very helpful to prepare u.. Good luck x

Thanks for that information Kimm, very useful.  I just tried it and I score for enhanced rate in both components according to the self-test.

The key thing to put across is that you cannot do anything reliably. The law says the 'reliability criteria' must be applied to each activity ie can you do the activity when you need to, as often as you need to, safely, and in a reasonable time. Also, if you are free from CCH when they visit, make it absolutely clear that your ability to function at that time is not representative in any way of the terrible non functioning condition you are in at other times every day. In my husbands interview the HP was obsessed by the fact that he was fine at the time.

My husband has had CCH since 2008. He had a PIP assessment in Dec 2014, ATOS sent the DWP a completely false and unjustified report that ignored all the evidence, so the DWP refused. The claim is now under reconsideration and we expect a better result because we have shown the ATOS report was false.

Because of this I have read the entire DWP Guidance to assessment providers, I found that ATOS had not complied with any of the guidance so we have lodged a massive detailed complaint. Also neither ATOS or the DWP used the reliability criteria, but the law says they must so we have asked the DWP to use it in the reconsideration. I trust they will!

I can't see how it is possible for anyone with Chronic CH to not qualify because by definition the sufferer cannot reliably carry out any activity for nearly every day of the year.

Good luck, I can understand it is not easy for everyone to talk about stuff, but you must make sure your points are made, and you are allowed to have a family member or freind to help you make them, so think who will be the best person to help you do this. Just in case you are unlucky, I recommend someone make detailed notes after the interview of everything that happened while it is fresh in your mind. We did cos we thought the interview was odd and quite abusive, and i am so glad we did because it meant that when we saw the false report we could look up everything that had actually happened.

Would be very interested to know of other CCH experiences with ATOS.

Harriet that's valuable advice from you.Would you mind if we added that to our store of advice on benefits and employment issues?  Maybe put a piece in the OUCH magazine CHit CHat.

Thank you so much for sharing that.

Hello Val, I am more than happy for you to do whatever helps others with that info. The document I am refering to is the DWP PIP Assessment Guide:

Unfortunately, my trust that the PIP reconsideration would include the DWP applying their guidelines this time round was misplaced. He recieved a second refusal today, the DWP are still not applying the reliability criteria, and they are still using the ATOS report even though it can be clearly seen that it is not a report that meets the standards that the DWP require.

It is hard enough living with the devastation caused by CCH, without the stress and exhaustion caused by trying to get the system to simply follow it's own rules. Thanks to OUCH UK Helpline giving me the listening ear I needed this morning and encouraging me not to give up.

Now embarking on seeing the MP to ask him to act regarding the failure to use the legal criteria, preparing a formal complaint to the DWP, waiting for ATOS to respond to our serious multiple complaints, and preparing for tribunal. All the time watching the bank balance disappear and hoping we dont have the same trouble with ESA now my husbands business has finally folded due to CCH.

I describe my chronic clusters clusters like some one who has several daily fits between fits they are resonable, but when a cluster hits its like a person in a fit you cannot do anything and need someone to oversee you.

i also mention the "resonable" often has an extra dimesion of the shadows of no severe head pain but the clumseyness, lack of co ordination, concentration and nagging background headache similar to a person with depression.

This I think helps the examiner picture the condition better.

I  was award pip benefit on November 2014 for both care and mobility for six years and I had home assessment and she who oxygen I had in my flat. I was award enhanced level for both care and mobility. She could understand how disability can effectively me on day to day basis.  I also low brain pressure as part my serve chronic cluster headaches attacks patterns as well.

Joanna: So glad you had a positive experience with your interview, and what a great result, you got exactly what you should get. It is encouraging to hear that the level of disability and chaos caused by CCH gets properly recognised some times!

duetto: we have included your way of describing Cluster Attacks in my husbands ESA form, my husband thought it was a very good way of explaining. Thanks.

My husband's tribunal appeal form has gone in now. I would love to hear any CCH tribunal experiences, good or bad, it still helps to be aware.

good wishes to all,

Further to above, my husband (CCH 6 years) just received his ESA decision, straight into the Support Group without even an ATOS interview. Fantastic to be in receipt of a sensible and appropriate decision given the trouble we are having with PIP.

We did robust form filling, stating 'not reliably' under all the activities and a relevant description of the inability to function during the attack, enclosed an additional detailed description of all the effects of CCH from the attacks to the general blurred reality, under the 'loss of consciousness' part we described in detail how altered awareness is during attacks, and crowned it with a letter from the Consultant (thanks Andy on the helpline, that was your advice).

Always happy to share details if it helps anyone.

Meanwhile the PIP saga continues, have been giving ATOS a hard time for their fraudulent report and it has been escalated which has resulted in them deciding to send a supplementary report to the DWP. We don't know what it says yet, but have requested a copy.

The wrongdoing with PIP is legion, but a key one so far by three ATOS employees and two DWP employees is that all five of them are applying the old criteria for DLA to PIP, instead of complying with the law and applying the reliability criteria. The two at the DWP have been unable to explain to me why they Re using that criteria. The MP has asked the Disibility Minister to look into this. If anyone else gets a PIP refusal using the phrase 'most of the time' I would be most interested to hear.